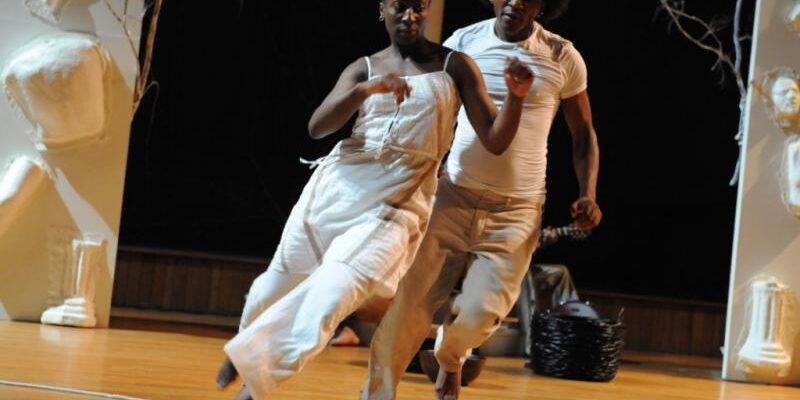 Results of trip with regards to initial purpose:
1. Rwanda – The Raiz di Polon dance company of Cape Verde and the Amizero Dance Company (a part of the University Center for Arts and Drama) of Rwanda intend to create and stage a collaborative dance piece for performance in Rwanda and, hopefully, Cape Verde and beyond. The idea, the result of discussions held between Jeffery Hessney, of Raiz di Polon, Amizero’s artistic director and main choreographer, Wesley Ruzibiza, and Mutheu Mbondo, the coordinator of the United Cultures for Development Network, to which both of the companies and their respective associations belong, has, as a result of my trip to Rwanda, evolved to focus on the idea of nostalgia as a point of connection between Cape Verde and Rwanda, two vastly different countries with or little or no obvious historical connections, but which, nevertheless, coincidentally share several characteristics – both countries are considered “success stories” in their respective regions, and both have done so “against the odds,” so to speak (Cape Verde due to its lack of natural resources , Rwanda because of its population density, among the highest in the world, and its recent history of extreme violence and strife). Albeit at different levels and for entirely different motives, both countries also share relatively recent traumas – the genocide in Rwanda, which killed more than 10% of the country’s population just 18 years ago, and the famines that, prior to independence in 1975, periodically affected Cape Verde, starving up to one-third of its population to death as a result – which are dealt with in different ways. While in Rwanda, the genocide is ever-present either as overt discourse or as the backdrop for nearly everything that takes place both socially and politically in Rwanda (thus representing an example of active memory), in Cape Verde the memory of the famines is not often discussed, except in the form of somewhat folklore-ized songs and poetry. This leads to two very different forms of regarding and dealing with the issue of “nostalgia,” given that, in one instance, nostalgia is a longing for what could have been, while in the other, it is a longing for what one imagines once existed, with both of these “longings,” both of these “nostalgias,” simultaneously aware of and blind to various positive and negative aspects of “past” and “history.”
Given the need to mobilize resources for the joint  project, which we envision to include three dancers from Raiz di Polon and three dancers from Amizero, as well as the main choreographers/artistic directors of both groups (Mano Preto and Wesley Ruzibiza, respectively) and myself a Rwandan musician for additional production/musical/artistic support, we plan to schedule actual joint creative work for some time in the second half of 2013, although the possibility exists of Raiz di Polon traveling to Rwanda later this year to participate in a dance festival, an opportunity that would be taken advantage of so that the dancers from both companies could become acquainted with one another’s work. Until Raiz di Polon’s travel to Rwanda, choreographic / thematic ideas will be exchanged between Mano Preto and Wesley Ruzibiza, who will both work on improvisation-based choreographic ideas with their respective dance troupes. Rehearsal space will be guaranteed by Amizero, and the resulting piece we expect to premier in Kigali and, taking advantage of the proximity to Kenya (and the fact that the most convenient travel path from Cape Verde to Rwanda obligatorily includes a stop in Nairobi), in Nairobi.
2. Kenya – While in Kenya, in addition to getting to know the new offices of the secretariat of United Cultures for Development (UCDN, to which Raiz di Polon belongs and whose coordinator, Mutheu Mbondo, launched the idea for the collaborative works that were the object of my travels) and becoming more familiar with the secretariat’s day-to-day work, I met with visual and performance artist Miriam Syowia Kyambi, who is currently developing the project “Fracture,” a large-scale installation she intends to premier in October or November of 2013 (to coincide with the 50th anniversary of Kenya’s independence from Great Britain) at the National Gallery in Nairobi (which has already given its go-ahead for the use of the space for the project) and which will feature various different “interventions” in the various rooms and halls of the National Gallery building. It is planned that the Raiz di Polon dance company will occupy one of these exhibition rooms, in which it will perform its (choreographic) interpretation of the theme “Fracture,” which Kyambi envisions as a project aimed at questioning the idea of post-colonial identity (particularly in Kenya), particularly in the light of the fracture that took place in this very identity with the colonization of the peoples of Kenya – an interesting counterpoint to the Cape Verdean colonial experience, in which the “fracture,” so to speak, took place at the very inception of society itself, given that Cape Verde, an archipelago of nine islands, was uninhabited at the time of its settlement by Portuguese “colonizers” and West African slaves, who quickly, if traumatically, formed a unique and unified culture and identity. As such, “fracture” may be considered to be one of the catalysts for Cape Verdean identity, for better or for worse.
If the project debuts, as Kyambi hopes, in late 2013, Raiz di Polon’s dancers (the number will depend upon the funds we manage to mobilize by then) would travel to Kenya at least one month before for creative work in Nairobi and, once again, funds permitting, Kisimu and Mombasa. We would also take advantage of our presence in the Kenyan capital to perform our previous works on stage.
In Nairobi, I also met with Jim Chu, a young multi-faceted artist (video artist, musician, filmmaker, painter) who, among other things, is a member of the band Just a Band, which enjoys a large cult following in Kenya, and with whom we plan to engage in a computer dance project and, possibly, some collaborative work within the context of his work with Just a Band.
Jeffery Hessney

The Raiz di Polon dance company from Cape Verde and the Amizero Dance Company (a part of the University Center for Arts and Drama) from Rwanda intended to create and stage a collaborative dance piece to be performed in Rwanda first and, hopefully, Cape Verde and beyond.