SPOTLIGHT ON A GRANTEE: Yvette Hardie 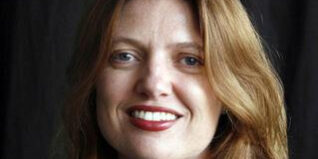 This month, stage director and AMA grantee Yvette Hardie travelled from Cape Town, South Africa to Yaoundé, Cameroon, to participate in this year’s edition of the International Festival of Theatre for Children and Adults (FATEJ), which was hosted by the Théâtre du Chocolat in partnership with ASSITEJ Cameroon.
At FATEJ, she presented the play The Ogreling, directed by herself and featuring South African actress Constance Didi-Nonceba in a starring role. Written by Suzanne LeBeau, this beautiful, moving, and thought-provoking piece deals with the essential moral problem of the duality between man’s goodness and his capacity for evil. It won a Silver Ovation award at the National Arts festival in South Africa and was a great success at the FATEJ festival. In addition, in her capacity as president of ASSITEJ, she attended the annual meetings of the African Children and Youth Theatre Arena (ACYTA), which were held concurrently with the festival.

The production was very well received, and we held an informal workshop for children after the show in which we demonstrated the puppetry, and aspects of the set and props to them, as well as discussing the play. The networking meetings were important in tracking various countries’ progress in ASSITEJ, and in planning for the future. There was also ample opportunity to discuss work made for children and young people in Africa, and to see different examples of this work from Chad, Benin, Senegal and Cameroun, as well as South Africa. A highlight was the workshops for the Network African Talent Project, which we feel has great potential to inspire young artists across Africa to make theatre work for children and youth and to work cross-culturally.
We had a problem with our visa company, which did not return the yellowfever certificate with the passport the day before I travelled, which could have denied me access to Cameroun. I ended up having to pay a bribe to enter the country without a yellowfever certificate. The certificate was later retrieved, scanned and emailed to me so that I had proof to the authorities on leaving. We had problems with countries not arriving for the meeting – several countries that we had anticipated would come (Zambia, Zimbabwe, Togo) were not able to come due to their inability to raise the needed funds, or get visas. This is always a problem with African travel. We set dates for 2013 at this meeting, so that everyone has ample time to work for the necessary funding. We will be sending out minutes with this information in the next week to inform those who were not able to attend.It was too expensive to take our set with us to Cameroun, so the Cameroonians rebuilt our set for us. It was not ready in time for the first performance and performances had to be rescheduled. However, ultimately the set was well made and worked for the production, and we feel that going this route is preferable and ultimately easier, than having to deal with very expensive cargo arrangements, which are also administratively tricky.
We will be supporting Senegal, Egypt, Equatorial Guinea and Mozambique to create new centres of ASSITEJ in their countries, which is a very exciting prospect coming out of the meetings. We will be following up with each of these countries and helping them establish the centres and assisting them in their strategic planning for the coming years. We hope to have more invitations for the production to other festivals as a result of the exposure that The Ogreling got in Cameroun. We established a good relationship with the organisers of the Ravenna festival, and will be following up with them to both track the Network African Talents festival and to look for other exchange possibilities between Italy and Africa. We will be inviting German, Swedish and Camerounian productions to apply for the Out the Box Festival 2013, and hope to host at least one of these companies in SA next year. We also hope to host a festival organiser from FATEJ (Sophie Mempuh) at our National Arts Festival venue next year, so that she can gain more experience of festival management.

AMA congratulates Yvette on her successful meetings and performances, and wishes her all the best in her future endeavours as a keen advocate for children and youth theatre in Africa.