Grantee on the road: François-Xavier Gbré 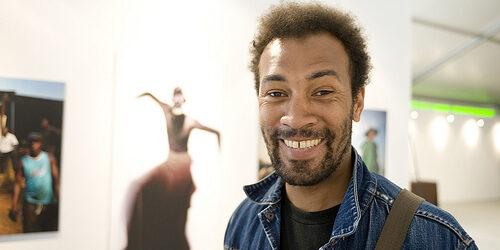 AMA grantee François-Xavier Gbré recently returned from a trip to Rabat, Morocco, where he completed a residency and organized an exhibition in collaboration with Moroccan illustrator Zineb Benjelloun at Kulte Gallery & Editions. His stay extended from September 15 to 30.
Born in Lille to a French mother and Ivoirian father, François-Xavier Gbré is a photographer with extensive experience working and exhibiting across Europe, Africa and the Middle East. A graduate of the École Supérieure des Métiers Artistiques in Montpellier, he devotes his photographic practice to investigating notions of métissage, migrations and memory. Since 2009, he has turned his lens to the world’s forgotten spaces; buildings and ruins which have stood the test of time to survive as testimonies to histories of colonization, survival, resistance, change. His work has been exhibited at the Rencontres de Bamako (2009-2011), Tiwani Contemporary, London (2012), Rencontres Picha (2013), Art Twenty One Lagos and the Galerie Cécile Fakhoury Abidjan (2014), to name but a few. He was the recipient of the Fondation Blachère prize at the 2009 edition of the Rencontres de Bamako; the second place winner of the PhotoAfrica prize (2010); and the recipient of the jury’s prize at the 2011 Nuits photographiques de Pierrevert.
Mr. Gbré’s project in Rabat centres on the city’s ex-military hospital. Situated in the low-income neighbourhood L’Océan, the buildings of the hospital Marie Feuillet were home to successive sultanates before being consecrated as the nation’s centre of medical research. Closed in 1999, the hospital (commonly dubbed “Marifiyi”) stands as a powerful vestige of the histories of medicine and monarchy in Morocco. Together with illustrator Zineb Benjelloun, whose work focuses on the urban landscapes of North Africa, Mr. Gbré set out to document the abandoned spaces of Marifiyi. Their project culminated in an exhibition at Kulte Gallery and Editions and will hopefully lead to a publication as well.